Chances are you stumbled upon this article looking for the value of the Death of Superman comic book you have or are interested in buying/selling. Now, it all depends on which Death of Superman issue you are referring to, so we have values for the most common and valuable issues below.

The platinum edition originally came poly-bagged and has a silver Superman logo on the front with the text “Here Lies Earth’s Greatest Hero” Each poly bag is sequentially numbered – with 10,000 copies in existence. These were originally given to dealers as an incentive item. Keep in mind the values above reflect comics already graded by CGC – which is an added cost. Here is more information on grading your comic books. Also if you were to sell your copy online, you’d realize about 20% sale commission.

The Black Bag Superman #75 is pretty easy to find for sale – most have been left inside the black ploy-bag. This issue of the Death of Superman has appreciated some over the $2.50 cover price despite not being all that rare.

Black background around “The Death Of” and Superman Logo in UPC box.

Silver background around “The Death Of” and Superman Logo in UPC box. 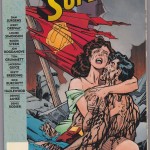 Silver background around “The Death Of” and UPC box. 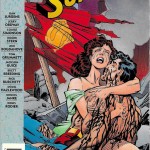 Black background around “The Death Of” and UPC code appear of front cover. 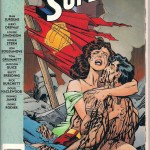 This issue of Superman is the 1st “Death of Superman” story line. 8th Legion of Super-Heroes makes an appearance, Luthor and JLA appearance. This is also the last 10-cent issue, the next issue would cost 12 cents. On the front cover features Superman laying down, with Luthor inspecting Superman with a stethoscope Luthor proclaims “I did it … at last I’ve Killed Superman! Not a sign of life in him … His body is turning green from KRYPTONITE poisoning! Cry your hearts out, folks!” Finding an issue for sale is not particularly difficult, and one in near perfect condition is worth about $350.

– Updated Q2 2016 – The market strengthened on high-end graded Platinum Editions, possibly due to the lack of supply that was for sale for most of the first few months of the year. The high-end range of the black-bag version ticked up to $30. Ungraded Platinum Trade Paperbacks (TPB) trended down in value roughly 20%, while high-end graded versions (not seen too often) increased in value.